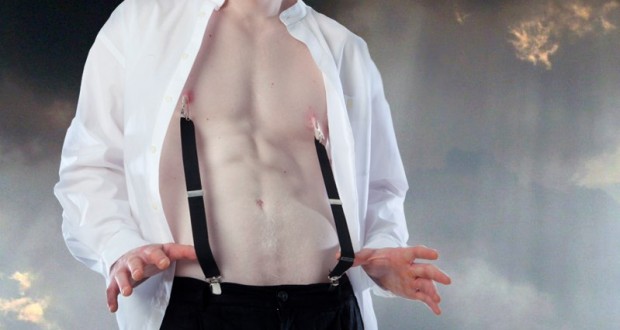 Nipple Clamps As A Fashion Statement! 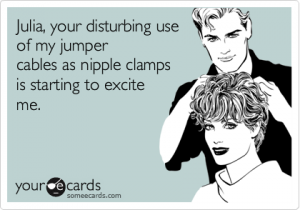 Since the male nipple usually is smaller, not all Nipple Clamps that works for women will produce the same effect for men. Not only are the nipples smaller, the male nipple will also become more slippery as a result of sweating, meaning that Nipple Clamps are less likely to stay in place. They will slip off slowly. That is very painful, which can be fun if your sub can handle that but usually is experienced as anything BUT fun.

For this reason, when buying clamps turn to smaller, metal ones. Specialized BDSM-shops will sell clamps with small “teeth” inside. These look more intimidating than they really are, but they are helpful to keep the clamp in place. Often all other commercially available clamps will simply not hold and you need to turn to other – usually home made – solutions. Here is one, based on simple adjusted clothespins.

Removing parts of the sides of the clamping area using a rasp or sandpaper leads to the creation of “pinpoint pins” . These provide two benefits, the same clamping pressure will be applied over a smaller area (hence increasing the sensation), they will fit on the male nipple and double the number of clothespin tips may fitted to the same bit of anatomy (other then the nipple). Remember to round the edges slightly with sandpaper to avoid splinters or other inadvertent injury.