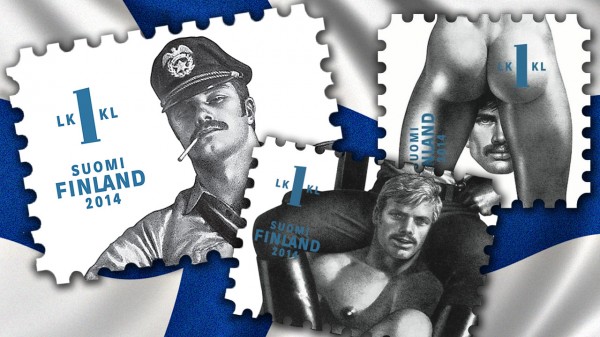 The three stamps, due to be issued September 8, display paintings of naked male buttocks, a mustachioed man in black leather boots, and the naked man on whose shoulders he is seated. The paintings are by the late Tom of Finland, the pseudonym of Touko Laaksonen. 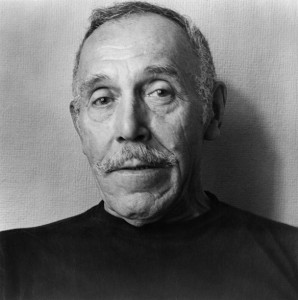 Tom of Finland’s real name is Touko – because he was born on 8 May 1920, on the south coast of Finland, and May in Finnish is “Toukokuu”. His homeland had been independent for just three years when Touko was born, and outside its few cities the country was still rough and wild. The men who worked in the fields and woods, the farmers and loggers, were true frontiersmen, every bit as rough and wild as the countryside.

Touko grew up among those men but was not a part of their world. Both his parents were schoolteachers, and they raised Touko indoors in an atmosphere of art, literature and music. Obviously talented, by the time he was five he was playing the piano and drawing comic strips. He loved art, literature and music. But he loved those outdoorsmen even more. At that same age of five, Touko began to spy on a neighbour, a muscular, stomping farmboy whose name, “Urho”, means “hero”. Urho was the first in a long line of heroes to hold Tom’s attention while he memorized every flex of their lean muscles, every humorous twist of their full lips. In 1939, Touko went to art school in Helsinki to study advertising. His fascination expanded to include the sexy city types he found in that cosmopolitan port – construction workers, sailors, policemen – but he never dared proposition them. It was not until Stalin invaded Finland and Tom was drafted into a lieutenant’s uniform that he found nirvana in the blackouts of World War II. At last, in the streets of the pitch-black city, he began to have the sex he had dreamed of with the uniformed men he lusted after, especially once the German soldiers had arrived in their irresistible jackboots.

Itella Posti, the Finnish postal service, says demand for the stamps is “unprecedented, so it is taking the rare step of making them available by advance order.

“The extent of the international attention received has been unprecedented,” said Markku Penttinen, head of development for Itella Posti. “Tom of Finland works are unique and known worldwide. The works selected for the stamps are among the most tame in the artist’s portfolio, but nevertheless display his characteristic style. The presentation of the stamps has received praise worldwide.”

Well, it hasn’t been all praise. Some 2,000 Finns have signed a petition demanding that Itella Posti cancel its plans to issue the stamps.

“The sexual orientation of the men in the images don’t leave room for any interpretation. We don’t want Finland to be represented on homeland and international shipping with homoerotic themes,” says the petition.

Tom of Finland (1920-91) typically portrayed brawny men in leather, denim and knee-high boots, and often sporting an erection. The three stamps to be issued aren’t that explicit, but even their R-rated homoerotica is unknown in the history of philately.