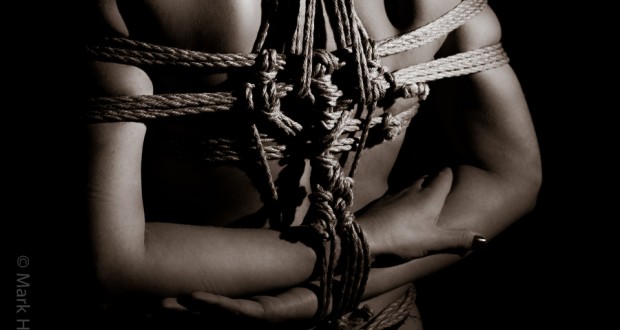 The basic forms of Japanese Bondage include:

Although the Japanese mostly use rather rough types of rope, the general advice is to use very soft and tender ropes, about 10 to 12 mm thick (half inch), especially for the bondage described below. A full Japanese bondage is built up in different layers. The ones here are basics. It is a very good idea to combine them with other, western types, like a hog-tie. A second professional tip is to use a set of relatively short pieces of rope (unless otherwise specified you will need pieces of about 3 M (3-5 yards). Use only flat knots. If you do not know how to make one, it’s simple: cross the left end of the rope over the right end and then go back crossing right over left (if you want to be a future bondage master, join the boy scouts at a very early age!). The trick about using short pieces of rope is that you are able to adjust certain parts without having to untie the whole thing (which is very helpful in just about every bondage, not only Japanese). You will find that your sub will ask you to tighten certain strings, once she is underway for a couple of hours. She needs the extra massage and the ropes will literally give her the idea that these are the only strings, holding her body together.

Right, having said all this, let’s start with the first one. By the way, these first two bondage go together very well and can both be worn under normal clothing (how is that for a visit to your mother-in-law’s, a nice dinner or just a day at work!!!). Together they form a sort of bondage-lingerie. 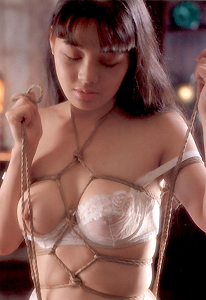 Shinju (Japanese word for pearls [i.e. the breasts])
Start off with rolling your first piece of rope around your sub’s torso, just under the breasts (the ropes should touch these and will later support them). Do not do this too tightly but make sure the tightness of each individual winding is just about the same as the previous and the next one. Tie the ends together on the back: the knot should be right next to (not ON) the spine. Next you wind your next rope in exactly the same way above the breasts. 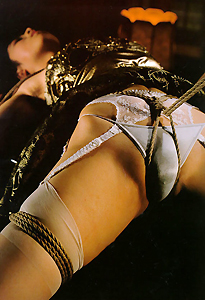 Sukaranbo (Japanese word for cherry)
For this one you will again need three ends of rope. Take your first end, double it up, lay it around the waist (again not too tight), lead the ends carefully through the crotch (in between the labia and over the clitoris) and tie the whole thing together at the back, next to the spine. You can add some refinement here by making knots in the ends passing the crotch that will exactly touch either the clitoris, anus or both.

Wind the next rope around the upper thigh, just under the bottom. Tie the end together at the outside of the thigh, touching the bottom on the outside end. Be sure to leave one end about 30 CM (13 inch) long. This end is to cross the bottom, tilt it a little and is tied to the waist winding, exactly in the middle (next to the spine again). Fix the other rope around the other leg in exactly the same way. (The two ends crossing the bottom, each with a knot on the end form the “cherry.”) Apart from the direct stimulation of the clitoris and/or the anus a lot of the excitement comes from the “cherry” and from massaging the inner parts of the thighs and the bottom/leg border (those of you who are into caning know that this is the most sensitive spot on the bottom).

Interested in learning more about Japanese and Western Rope Bondage Techniques? Read the rest of this article and hundreds more on such topics as Karada, Kotori and Shibari at Wasteland.com complete with video guides and tutorials to bring out the Shibari Master in you!

Previous: A How To Guide To Sensuous Spanking
Next: Bondage Basics – Leash Testing Tips